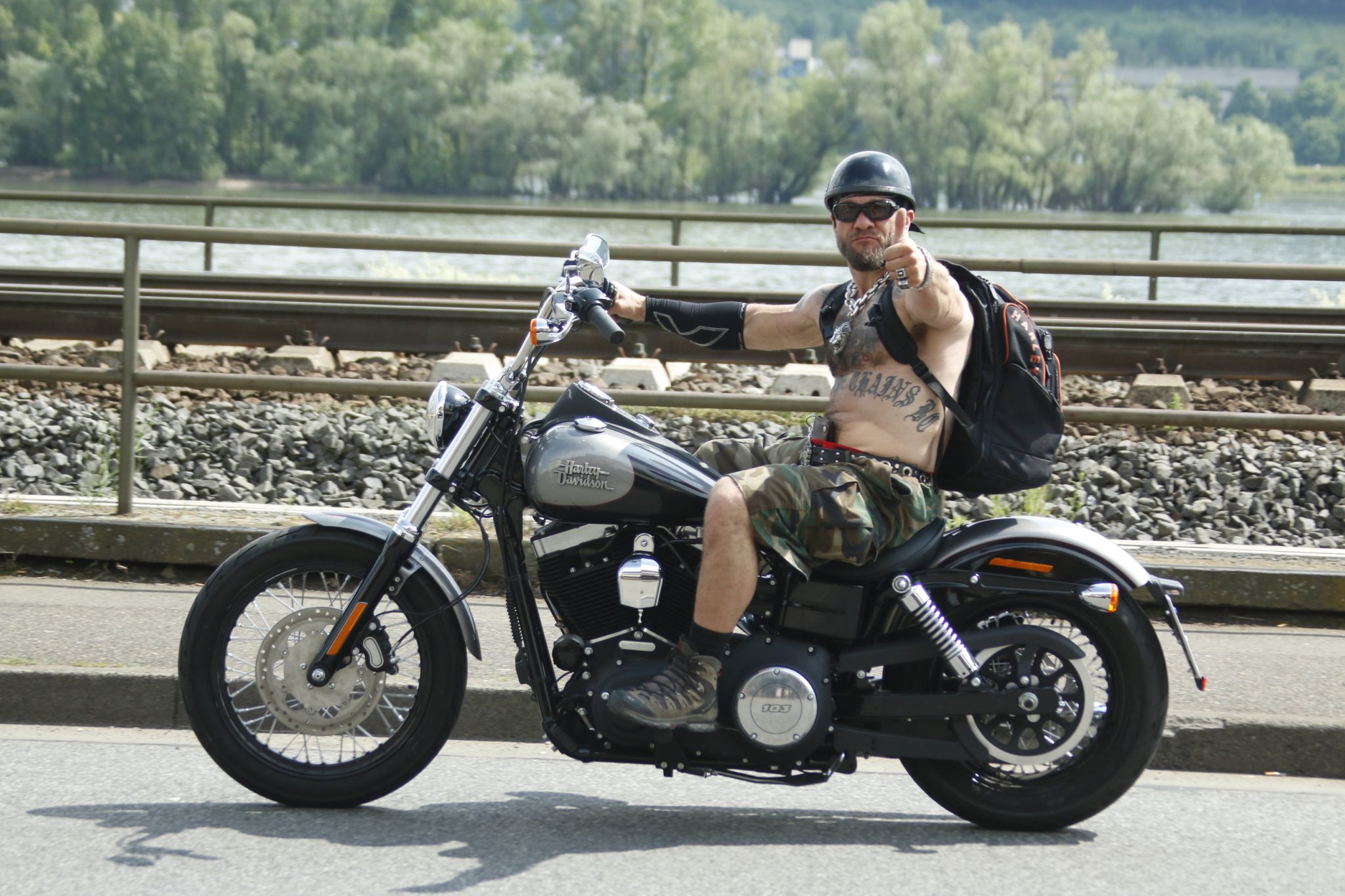 Friday night, just before midnight and I had just laid down to bed when I heard the buzzzzzz from my cell phone.
Yes, the Lion has a cell phone now, believe it! haha

It was Jerry Jr Sigmund H.O.G Charter and life member, Special Affairs Officer and Editor. He says it’s important that we meet.

So, I leaped outta bed and grabbed my helmut, keys and jumped on my Harley Davidson Sports Bob given to me from Mr.Tomas Trapp of Harley Davidson Frankfurt Factory Germany, and sponsored by Mainhattan Choppers.

How stoked was I to have this opportunity not only to get ride in the beautiful country of Germany, but to hang with my Manhattan Chopper family and Flincher’s 33 brothers (vid coming next week).

I got down to the main drag in Ruedesheim, where there were still well over 10 000 super rad bikers from all over the world enjoying some nice times under the beautiful stars amongst the endless wine vineyards.

I wish I had a better camera to show you how stunning all the castles look all lit up under the moonlight on the Rhein river… ahh man.

Jerry tells me he has great news. He says, “Tomorrow morning we will have an opportunity to flip my tire at the front of the parade along with 1000’s of bikers as they line up for the 10 km ride.”

He says to me, “Just before the parade starts, we will have to leave and head through the back roads to get to the finish line where the parade would end.”

Unfortunately, we did not get the tire out in time at the finish line, but had the chance to meet many high ranking First responders who had already heard of what we were doing to not only raise awareness to PTSD, but also raise money for the H.O.G Charity.

During the opening of the parade, I wish I could tell you just how many people Jerry had go to speak with about what we were doing. We had met at least 300 people in the 2 hours that we were there and to ice the cake, we made it on the news, and Jerry translated in German to many newspapers.

I would like to say I flipped my tire the entire time, but no chance, so many bikers, and kids wanted to try and help me, we even had a few soldiers from France come out to support us shake our hands.

The best part of that day for me, was to have European Nato members, and Polizei Commanders come and shake hands with me and welcome me to their beautiful country and thank me personally for this crazy idea of mine to raise awareness to PTSD (currently working on doing a speaking presentation for the Military here in Nov).

The looks of happiness in their eyes and the feel of their hugs and support made me tear up many times, and to even have EVERY person Jerry spoke with reach into their pockets to throw a few Euros in for the charity, sure did make the day every special.

A very special thank you to Jerry and Jerry Jr, also to all the police and military forces that came out to support us was just amazing, considering we only had 10 hours notice that we were even able to do this last minute.

Mr Bernhard Jung, Organizer and team member of Buddies and Bikes, Thank you Sir for this golden opportunity. Much respect my brother.

Stay tuned as many magazines and more Magic bike vids are coming,