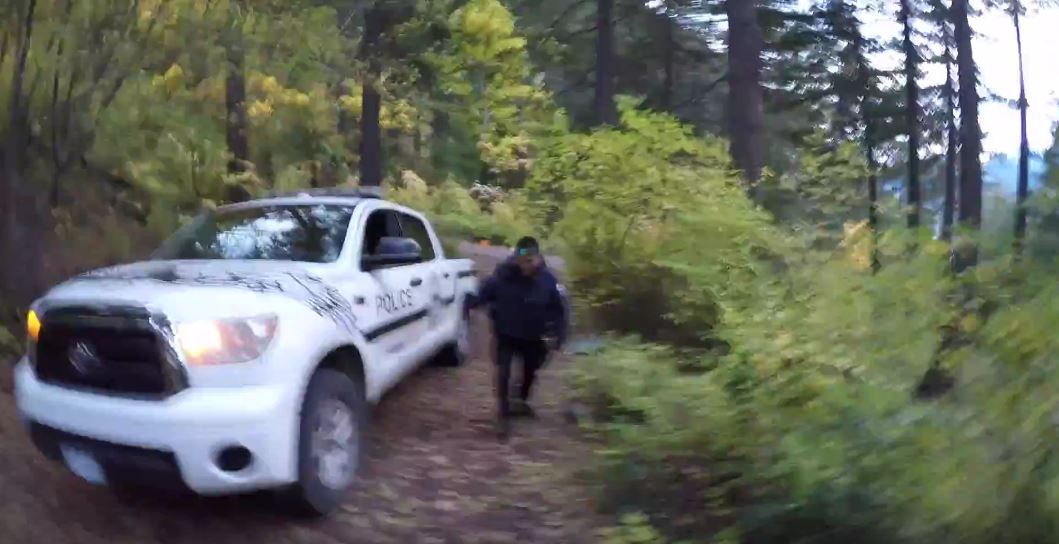 After hours of intense interrogation, by Constable Leonard Isaac, of the Tribal Police Stl’Atl’Imx, Mr.Terrance Joseph Kosikar refused to testify and is protected under s. 13 of the Charter from having any incriminating statements “used to incriminate himself in any proceedings against him at this time.

Kosikar says, “It’s not very often you see many people where I live out here in the backcountry, so today was very odd to me when I heard the rumble of a truck creeping its way up the long road to my cabin. I got the binoculars out, and to my surprise, it was a Tribal Police Truck.”

Kosikar admits he immediately ran inside the cabin and put all the guns away..grabbed his camera and started filming this unique situation. Ya see, even when people get shot up here or stabbed, its still very rare for the police to show up.

Do I have a warrant for my arrest? Maybe hash tagging FBI – Federal Bureau of Investigation, or BC RCMP wasn’t such a good idea in a lot of my recent posts? Sure enough, the truck pulled into my driveway, and yup..it sure was the P O L I C E

Relief came immediately, when the man said his name and I realized …wait a second …we’re Facebook Friends aren’t we? We talked for a few minutes in my driveway, and then invited Constable Leonard Isaac inside for a cup of matcha tea. We stood on my deck for a few hours talking until the sun went down and learned many things about each others past and present.

Our conversation will forever be confidential, like it is with all my new facebook friends who reach out to me either through email, phone or in person, but I had one question for this man, why did he drive over 100 kilometres to my cabin to visit a small time, nobody like me?

Constable Leonard Isaac, stated that he had been following Breaking the Chains BC on facebook for many months now after learning of our PTSD / Mental health Awareness program through one of our producers David Malysheff from Gamut Productions.

He had felt bad that he couldn’t take any time off this summer to join us in English Bay to help us flip our tire, so while he had just received 6 subpoenas to give to people in our town, he thought he would stop in not only to meet me, but also get his hands on our tire to help raise awareness to PTSD and, even so much as invite me to ride along with him to deliver these court orders.

I tell ya one thing about this experience today..First of all, I am honoured that this man drove over 100 kms to my cabin to meet me in person and join me for tea and many hours of man to man conversation ..but this is where I learned something I never really understood and/or felt until I sat in his police car as we drove around town.
It was the first time I had wished that I too was wearing a bullet proof vest, and had a gun on my hip. In fact, as we parked at the first house to deliver the court order ..I seriously had asked him if he had an extra gun I could have in case shit went sideways. I mean, we are easily over 100 kilometres from any back up and this man like most small town police, RIDE ALONE.

I have been in many situations in my life, but never one like this where I actually felt that my safety was seriously at a huge risk here. I can’t even believe this man, like many others in our country walk up to houses to either serve warrants, or even just respond to domestic calls or any other calls ALL ALONE ..with back up being HOURS away .

Every time he got out of his car to go knock on the door , I kept looking over my shoulder for someone to walk up and potentially shoot me in the side of the head .. or, I just kept looking up at the windows for someone maybe wanting to do the same to him …these people in the house have NO IDEA we are only serving court orders …what if these people inside are running game, or think we are there for a different reason and want go out guns a blazing …I sit n watch as he knocks on the doors and stands to the side …each person opens the door, he greets them with a smile, but not knowing who else is in the house or what THEY maybe thinking or feeling.
I can see why so many police officers are the way they are ..They have to be, especially in a world full of so many total loony toons.

PEOPLE
I couldn’t even imagine doing this sort of job 12 hrs a day, most often 6 days a week …without dropping names ..I have spoke with many, many police officers in the last 6 months and may of them …have NOT EVEN GOT more than 1 day off per week for over a year. Really pisses me off when I see what the media only shows the people …the media is always showing how cops are beating or shooting someone by accident.

Why can’t the media show how over worked our Canadian Police officers are? Why do they only ever show the bad stuff? Why never the good stuff that 1000’s of Police officers do to risk their lives every minute they walk the street? How would you feel if every person who walked by you at work, weather in your office or even at the coffee shop could potentially SHOOT YOU??

How would we feel going to a job that, one minute you’re called to a suicide, and while doing the paper work on that call, you end up going to a child rape call, and then showing up to a call where some goof just beat a woman black n blue to the point she can’t even say her own name, on top of being at the hospital and having a mentally ill patient grab objects and start beating you with them, and knowing you can’t do anything about it other than try and subdue this person and keep them in control ..call after call after call ..day after day .. and yet ..does anyone ever thank these police officer for their service ..or just EXPECT THEIR SERVICE when they need a cop?

Why do we always see a cop and look the other way? When these are the HUMAN BEINGS who fight what we fear?
We expect them to keep the drugs out of our children schools, we expect them to come running when their is a stranger peeking in your windows when you sleep, we expect them to hunt down the predators, we expect them to take bullets for us and have any of us actually looked up and thanked a police officer rather than worry about getting a ticket or is our seatbelt fastened or are we speeding?

Do we ever stop for a minute and take a look at all the bullshit crimes that go on every minute of every day? Some people don’t even pull to the side of the road when they hear a siren, do we even think for a second that someone maybe dying or is bleeding..and who do you think shows up to stop the bleed or secures a crime scene or hunts down the murderer, rapist, drug / weapons dealer, or protects us against the criminals?

I spent many years when was younger committing these crimes the police respond too, and let me tell you first hand, most will never know or ever see what really goes on in the streets, in the jails, in the darkest of alleyways which even some of the most seasoned criminals wouldn’t event walk down on a good day.

Take a minute today – and if you see a cop, wave, smile, thank them for not only risking their lives to PROTECT us, but also be grateful we don’t have to go home with everything they see and do day to day to keep us safe.
When they go home after a shift, the gun and badge may stay in the locker, but the thoughts and feelings of what they endure and see each day stays with them..while they try and be a father, or a mother, they see the crimes, they hear the tears, they feel the loss of life day in and day out ..everyday of every shift and yet most of us …just EXPECT this from them?

Without names or departments…I will say this cause the media wont tell you, and neither will any cop ..but I assure you that nearly 70 % of all Police officers may look strong and are strong on the outside…but inside their hearts and souls are being torn to shreds without any help from their employers, they are brutally over worked and are taking home more and more trauma than we the public have any idea.

Today was Thanksgiving ..and I am Thankful for Constable Leonard Isaac for driving hours into the back country all alone, just to meet me, flip our tire to help raise awareness to PTSD / Mental Health and take me with you to deliver court orders. I feel and understand your position a lot more than I ever did Sir, and I have a lot more respect for all police officers around the world now knowing just how tough your job really is.

One day we will get “the presumptive” clause passed, (Bill M203) so all of our Emergency Service Providers can have access to the help they need sooner than later. When I say “WE” .. I MEAN US —- THE PUBLIC who YOU risk your life for everyday. Thanksgiving happens once per year, we should all be Thankful everyday of the year for our Public safety workers.